Lover Enslaved gets a 5 Screams review!

Wow, what a great start to my Saturday morning! I received an email from the funny and fabulous Estefanie at Night Time Romance Reviews with a link to the review she did for Lover Enslaved. If you get a chance, check it out and the other reviews she has posted on her site.

http://ntromancereviews.blogspot.com/2009/09/review-lover-enslaved-by-jodi-redford.html
Posted by Jodi Redford at 1:42 PM No comments: Links to this post 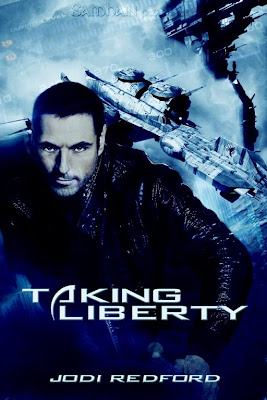 Kanaxa did this gorgeous baby.

I love, love, LOVE it!!
Posted by Jodi Redford at 7:55 PM No comments: Links to this post

Got my cover for Taking Liberty, and let me tell you, it is freakin' awesome. I can't post it until Samhain signs off on it so you better believe I'll be stalking their coming soon pages to see when it shows up. Speaking of which, TL is already on the coming soon calendar. Whoo Hoo!

My sister sent me this clip. Hilarious. Love, love, love Eddie Izzard. Warning, there are a lot of F bombs dropped, so don't watch if that sort of thing offends you.


Posted by Jodi Redford at 12:09 PM No comments: Links to this post

Okay, thought I should make it official. I have a new release coming soon from Samhain Publishing.

Yaaayy!!! Whoo Hoo!! (Insert foot stomping and various gleeful dance moves that both excite and terrify my poor dog.) I don't have a cover for the book yet but when I do you can bet your hot diggity I'll be adding some more interpretive dance moves to the ole repertoire.

In the meantime, here's the blurb and warning for Taking Liberty.


From zero to naked at warp speed…

Rini Campell’s one shot at keeping her field agent position with the United Galaxies’ repo department means bringing in the spaceship . Piece of cake. Except she didn’t count on the pilot still being on board. Or being buck naked.

Lucus Granger doesn’t have time to deal with a pain-in-the-ass repo agent. Not when he’s minutes away from dropping off a cargo haul for the psychotic alien dictator of Aquatica. Though he figures it’s just about the stupidest bargain he’s ever made, he allows Rini to tag along for the flight.

Stranded in enemy territory, they find themselves fighting a battle on two fronts. Against a creepy dictator who’d as soon drown them as look at them. And against a blazing attraction hotter than the godforsaken planet itself. For these two wary hearts, love could bloom in the desert...if it doesn’t kill them first.

Warning: A feisty heroine and yummy hero getting sweaty in the desert. Squid aliens who bring new meaning to the word slimy. Oh, and some close encounters of the sexy kind.

Posted by Jodi Redford at 5:05 PM No comments: Links to this post

Tonight writing will be a bust. But at least I'll get my Sam and Dean fix. Ahhhh...life is good.
Posted by Jodi Redford at 6:20 PM No comments: Links to this post