Updates and a new cover

Yes, I know. I've been severely neglecting my blog lately. Hangs head in shame. Between writing, editing, and the EDJ, things have been CRAZY. So you may have been wondering what's been up with me lately. Well, first of all, my smexy little novella, Vanessa Unveiled released the beginning of February. I even had a very awesome review for it just show up over at The Romance Studio. Here's a link in case you'd like to check it out.

After I get those two books finished, I have a ton of projects in the works that I'm hoping to get through this year and early 2012. And yes, I promise that Jace from Light My Fire and Jerrick from Lover Enslaved are both getting their books written in that time frame. :) Thanks to all the readers who've written to me asking about them. I love those guys too, and have exciting things in store for them.

Last, but certainly not least, The Seven Year Witch has a gorgeous cover from the uber talented Kanaxa. Behold: 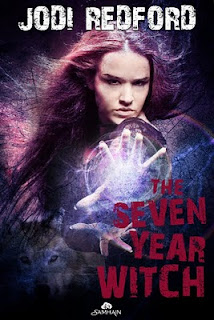 The girl on the cover was originally one of the possible choices for That Voodoo You Do's cover, but when I saw her I knew immediately she was perfect for Clarissa. And now she is! :)
The Seven Year Witch releases on June 21st, and I can't wait. All of my books hold a special place in my heart, but I have to admit that Clarissa and Logan's love story is one that really ripped my heart out. But in a good way. Here's the blurb:

After this much foreplay, something's bound to combust.

But her resolve is vanishing--fast. Seven years ago she sold her soul to save her father, and that contract is coming due. The allure of spending her last days indulging in some dirty, naked loving is too tempting to resist.

Logan has patiently ridden out the past seven years, content to do Clarissa's bidding and ignoring his consuming need to mark her as is. Now that the ban on witch/familiar fraternizing has been lifted, he's off the leash and ready to launch a full-on sensual assault on her defenses. They're destined mates, and he'll do whatever it takes to convince her.

It's delightfully easy to get her in bed. Get at her heart? Not so much. Especially when a deadly predator stakes its claim on her...and Logan faces a battle not only to win her heart, but save her soul.

Warning: This book contains a villain with more personalities than Sybil, a witch in search of redemption and a dirty-talking werewolf hell-bent on claiming his mate in every wicked, sexy way possible. Spontaneous howling may occur.

Posted by Jodi Redford at 3:07 PM 2 comments: Links to this post