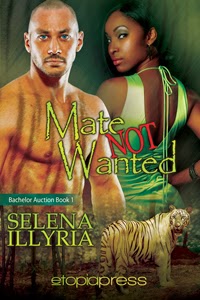 Tiger shifter, Pierce McKinnley has been trying his best to wear Madison down. Will she be willing to give him a chance or will she run like she always does?

Unofficial Unedited Sneak Peek:
“I’m fine, back off,” she spat, more venomously than she intended.

“Not until I make sure you’re not hurt.” Before she could protest he jerked her against him until her breasts pressed against his midsection. Her nipples became tightened nubs that pulsed with need. Her skin tightened as pricks of heat danced along her exposed skin and her lioness purred louder, demanding more contact with her mate. For a moment, all she saw was him. Her world became the bright white of his shirt marred by the dark stains of blood, his sweat and unique scent, the tanned skin of his neck. She leaned forward to rub herself against him, imprint her own perfume on his clothes. A soft buzzing sound filled her ears.

Whispers and murmurs swirled around them, pulling her back to the reality of where she was. Madison cursed her weakness and took a step back. She was supposed to stay away from him, not give him more ammunition to prove his theory that she was attracted to him.

“No way in hell. I’m fine. No damage. I could have handled myself, you know?” It wasn’t a bluff, but she had to remind herself of why she should be so pissed at him. Things could have gone pear shaped in a matter of seconds had she not stepped in. “Why do you have to act like such a beast? Jesus.” She ran a hand through her hair and focused her weakened anger at him. “You could have gotten someone hurt, or worse.”

He blinked. “I know you can take care of yourself. I was just trying to help.”

His voice was now soft and gentle, and yet that roughness still remained. It was like a single malt—smooth, creamy, rough, and could keep you warm on the coldest of nights.

Another shiver raced along Madison’s skin and smoothed down her spine. Her nipples pulsed with heat as her breasts grew heavy and tight. She wanted to move back into his touch, feel the press of his chest against hers as he moved within her, rubbing his skin against the sensitive tips.

Madison cleared her throat and tried to stave off her desire. “And I’m not your mate,” she lied, trying to shrug off the effects that his tenor had on her body, “friend or otherwise.”

“For now.” Pierce closed the gap between them until his chest pressed against her breasts, giving them just a hint of the pressure they needed. It wasn’t enough, not nearly enough.
Posted by Jodi Redford at 7:00 AM 2 comments: Links to this post