Eye candy. Yes, my friends, that's what this blog post will be all about. Specifically, the eye candy that we writers often have to wade through on the internet or magazines to inspire our muses to create one of our favorite things in this world. Okay, my favorite thing in this world. Hunky heroes. It used to be that I didn't so much rely on pictures. I just sort of visualized what they looked like in my head and that was that. But all that changed once I became published. Or more specifically, after having to turn in my first cover art request. I quickly found out that providing the artist with an image worked so much better than just giving some vague description that didn't really give them much to work with. And in the process I learned something.

I really am a visual writer. Who would have thunk it? So now I routinely gather up an image of my heroes and heroines right around the time I'm putting together the soundtrack for the book. And it really does help me to get inside that character better.

So I thought I'd post the two hubba hubbas who inspired my naughty pookas in Vanessa Unveiled. Without further ado, I present: 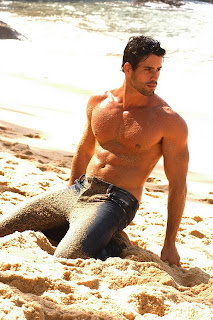 The only thing missing from this guy to make him an absolute Rand look-a-like are the clan tattoos on his shoulder, but other than that...ooh, mama! There's even a beach scene in the book which fits in perfectly with this picture. Of course, the jeans would have to be missing to make it truly authentic. ;) 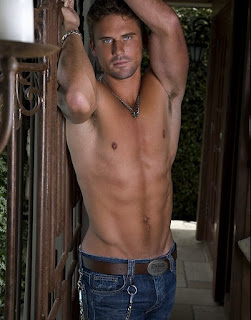 In my head, Braeden's hair is a little longer and shaggier than this guy's, but still definitely a dead ringer for my pooka. And those eyes, talk about hot and intense. And the chest and abs aren't too shabby either.

I also have an image of Vanessa too, but lets face it, it's the hunks that you really wanted to check out. Lol. I think later this week I'll do a post with the two hunks that inspired Griff and Logan from That Voodoo You Do. For those of you who watch Supernatural and True Blood, you might recognize some familiar faces.
Posted by Jodi Redford at 4:22 PM 2 comments: Links to this post

Labor Day wrap up and a blurb

So its back to work after the long holiday weekend, and I'm ready for Saturday to get here already. Pathetic, I know. I blame it on the grid-locked freeway traffic I was stuck in yesterday afternoon. Six and a half hours for a usually four hour drive. And this was even after the husband and I came up with the brilliant idea to leave early before all the other drivers up north. Yeah, apparently a million plus people had the same brilliant idea. But hey, I did manage to get some writing in over the weekend and even did a winery hop along Michigan's Old Mission Peninsula. Had a really good time (probably too good) sampling all the fabulous wines and eating the most delicious lunch ever at the Boathouse in Bowers Harbor. I've already decided to make another trip up there later this fall when the autumn leaves are at their peak. Now if only I can remember to bring my camera along...

In other news, I have a blurb for Vanessa Unveiled. I'm really, really geeked over how it turned out.

Vanessa Darby, a bounty hunter and tracker for the Veil Alliance League, figures things can't get any crappier than her car breaking down on a deserted highway. Until the two dimension-hopping renegades she's been assigned to capture lure her to their magical love nest in the woods and entangle her in a web of seduction.

How the hell is she supposed to resist a pair of gorgeous male pookas who have a wicked talent for bringing the sexy?

Rand and Braeden have searched more than three centuries for their one true bond mate. Now that Vanessa's been dropped into their arms, they have no intention of giving her up. Even if it means agreeing to her terms: if they can't persuade her within forty-eight hours that the three of them belong together, they'll give themselves over to the authorities. But convincing a woman who doesn't believe in love, or the concept of forever, is no easy feat. Particularly with one doozy of a dirty secret from their past waiting to trip them up.

Warning:Two hotter-than-should-be-legal pookas sexin' it up with each other and the stubborn woman they love. One magical hotel in the woods that isn't exactly what it seems. And a unicorn who will forever tarnish the image of the species.
Posted by Jodi Redford at 10:17 AM 2 comments: Links to this post