The Sons of Dusty Walker

The Sons of Dusty Walker have officially hit the cyber shelves at Amazon! Yee haw! I'm beyond excited to be a part of this amazing series! If you're going to be attending RT in Dallas make sure to look for our gigantic poster. Me, Randi, and our handsome cover model, Scott Nova, will be hanging around, so come say hi!

Dylan: The Sons of Dusty Walker 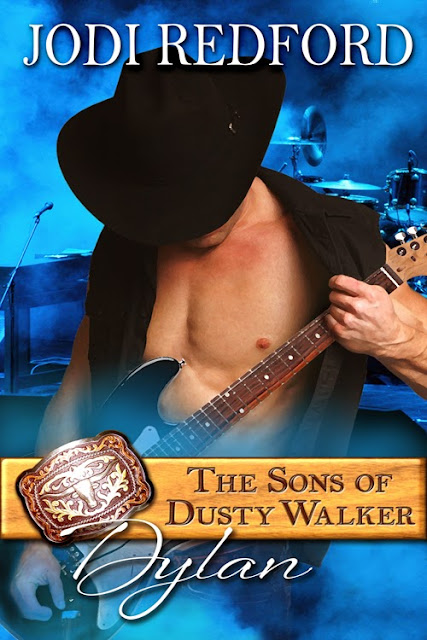 Secrets and lies—the legacy of Dylan Walker’s existence. Ashamed of his status as a bastard son, Dylan found solace and a sense of identity as the lead bass guitarist for Truckstop Pickup. But with one phone call, his world is shaken to its core. Summoned to Kansas after the death of his father, Dylan discovers he has three brothers he knew nothing about. Reeling from that earth-shattering revelation, he figures life can’t throw him a bigger curveball. Until fate puts him face-to-face with the woman his heart refuses to forget...and her little boy. Who just happens to bear a striking resemblance to Dylan.

Never love a musician. That’s always been Zoe Chapman’s number one motto. Daughter of a legendary country star, she knew that truth better than anyone. Then she’d met Dylan. He’d stripped her of her defenses, and she’d fallen. Hard. Now he’s back in her world. A living, breathing, too-sinful-for-words personification of everything she’s ever wanted. And can never have. Only Dylan is dead set on becoming a permanent fixture in their son's life. Determined to make her part of the package deal, he works at breaking down her walls again, and her resistance is slipping faster than her panties.

But there’s another secret Zoe’s hiding. And it could end up pushing Dylan away from her forever.


Dylan ambled into the periodical aisle and scanned the options. Naturally his favorite—Guitar World—was noticeably absent, so he picked up the latest Time instead. A nearby fashion rag snagged his attention, mainly because the model on the cover had a smoldering gaze that reeled him in. He stood there like a complete dope, the magazine clutched in his hand, but his mind was a million miles away, steeped in an erotic memory. Gorgeous green eyes locked with his, peering straight into his soul. The sensuous slip-slide of their sweat-slickened bodies. Zoe’s nails digging into his ass, refusing to let him go, even when he buried himself so hard and deep within her, he swore he could feel her heartbeat. Or maybe it was the fierce mad rush of his own pulse as she annihilated his defenses. She was a danger to all of his carefully held rules. Don’t get close. Offer no promises. Forget her and move on.

The first two had been taken out of his hands with her refusal to give him her last name. But Rule Three was impossible. He’d never forget her. God knows he’d tried.

He thunked the magazine back in the rack and continued his shopping, adding a box of Benadryl to his stash in hopes of it helping him get some shut eye the rest of the week. The sound of a young child’s laughter broke through his concentration. Customers must have come in when he wasn’t paying attention. Time to get his ass back to Hazel before someone beat him to the front of the line.

Rounding the corner of the aisle, he spotted the petite blonde parked at the counter. Damn, too slow.
He checked out the blonde’s heart-shaped posterior, his resignation shifting to appreciation. He’d gladly buy a round of beers for whoever was responsible for inventing yoga pants. Hell, he’d purchase them an entire distillery.

The female scraped her hair back and he spotted the hot pink streaks scattered in with the platinum locks. He wouldn’t have figured anyone around these parts for adopting an edgier style like that. Maybe she wasn’t local.

Hazel scooted up to her side of the counter and beamed a smile, instantly breaking up Dylan’s two-second happy parade quicker than a firehose set on full blast. Judging from the older woman’s response, the blonde wasn’t a stranger in town.

Just his damn luck. First female in a long time who stirred more than a passing fascination in him and he had to keep his mitts to himself.
“Zoe, dear. Perfect timing. I was about to give ya a ring to see about some private lessons for Ginger.”

Dylan jolted at the name. Holy shit. How damn weird was that? Here he’d been thinking about Zoe, and another one stood a couple feet in front of him. And it wasn’t even that common of a—

His thoughts rear-ending each other like a fifty car pileup, he jerked his attention back to the world class butt he’d eagerly admired seconds ago. A tingle of déjà vu tripping through his synapses, he blinked. “Zoe?”

“Hm?” The blonde sent him a distracted look over her shoulder.

Shock punching him square in the solar plexus, he returned the gaze of the woman who’d haunted his dreams for the last four years.

He cataloged the exact moment Zoe registered who he was. Her poleaxed expression hinted that she was equally stunned by their unexpected reunion. He prayed that her silence was due to disbelief. They’d left things on good terms, but shit knows women tended to recall events in a wholly different light than most clueless men. And he wasn’t too proud to admit that he could be dimwitted as the rest of his gender.

Figuring he better say something rather than continuing to gape at her like a psycho, he cleared his throat. “Man, it’s good to see you.”

She opened her mouth, but the only sound that emerged was a wispy, distressed breath. He didn’t think it possible, but her coloring turned several shades whiter than Casper the Friendly Ghost. Suddenly alarmed that she might be moments away from passing out, he rushed forward—and collided with the little tike barreling across his path. The kid bounced off Dylan’s leg and tumbled onto the ground. Before he could reach for the boy, Zoe snapped out of her daze and hunkered to her knees, her shaking hand smoothing over the tot’s stick-straight brown hair. “Hunter, that’s why I keep telling you not to run in stores.”

The sweet childish voice uttering those two words sent another bolt of shock careening through Dylan. Zoe...was a mom? Desperately trying to process that thought, he slashed his attention to Hunter. As if he’d known he was the subject of deep scrutiny, the little boy popped his thumb in his mouth and peeked up at Dylan.

He stared into Hunter’s eyes. Everything surrounding Dylan tilted at a funny angle and a strange prickle of awareness hopscotched across his suddenly flushed skin. The tiny person looking back at him was a mirror of himself at that age. Honest to God, with that kind of resemblance, Hunter could be...

Hot and cold flashes racing inside him, he reluctantly tore his focus from the boy and met Zoe’s horrified gaze.

Posted by Jodi Redford at 8:00 AM No comments: Links to this post