Grab a FREE hellhound! 3 Days only! 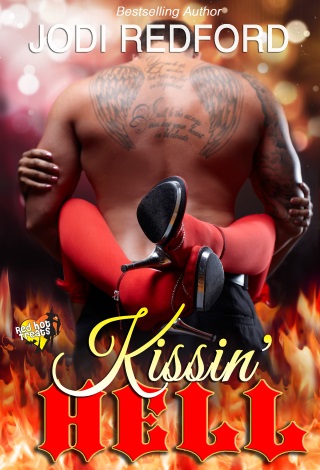 For a limited time, Kissin' Hell is absolutely FREE at Amazon. Don't miss out on this deal!

There are two certainties in life soul collector and hellhound Jericho Stryker knows too well—Death never takes a holiday, and women are typically more trouble than they’re worth. That goes double for his personal nemesis and regular pain in his backside, Lola McKenna. Sure, the luscious little hellcat gets his blood boiling in more ways than one, but some scratches are best left un-itched. That determination is strained to the max when a botched soul acquisition job lands him on the same case as Lola.

Fetching a stubborn soul from a haunted bordello should be a piece of cake. Unfortunately for Lola, she has to deal with Jericho horning in on her bounty. Attempting to keep her cool and her wits around her sinfully sexy adversary? Easier said than done. Especially when she finds herself locked overnight with Jericho. Not strangling him before sunrise? A faint possibility. Ignoring the lusty, depraved sexual fantasies he awakens in her? A snowball’s chance in hell of happening. But worst of all is the very real possibility that he could steal the one thing she most fears losing to him—her heart.
Posted by Jodi Redford at 7:00 AM No comments: Links to this post


I'm super thrilled to be hosting my good friend, Kellie Kamryn, today! Please make sure to enter her Rafflecopter giveaway at the end of this post for a shot at winning her fabulous book! 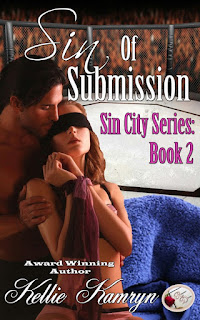 UFC fighter, Megan Renard, is having a difficult time keeping her eye on the prize when she can’t keep her eyes off of her long-time trainer, Ryan Blake. But changing a relationship that works isn’t a sin she’s prepared to pay penance for.
Dom Ryan desires to experience Megan’s gift of submission, yet he knows taking their relationship to another level could have disastrous effects for her fighting career, not to mention their friendship. One kiss is all it takes to convince him that heaven in her arms is worth the devil’s wrath.
Determined to give her an edge in the ring before her next title fight, Ryan hires Sinclair Reed to train Megan in internal martial arts. When the FBI show up to question Sinclair on the disappearance of Megan’s opponent,  the couple get caught up in a world of underground mob clubs, and Ryan comes face to face with a Domme he’d long tried to forget. Now he fights to protect Megan not only from a lifestyle he chose to leave, but from her desire to please him at all costs.
When it’s a fight for your life, submission is a sin.

Inner fire burned in Megan’s heart. A result of the recent win, or a pissy attitude because Ryan had put the kibosh on her sex life for the evening? Did it matter? Her ass pulsed in reminder of when his hand had connected with her flesh back at the airport. She wouldn’t let that go unchallenged.
Shifting to rest one hip against the door of his vehicle, she crossed her arms over her chest, bunching what little cleavage she had. The action had the desired effect. His eyes raked her body so quick, if she’d have blinked, she would have missed it.
Eyes narrowed, he stalked toward her and stopped, looming over her. Ryan didn’t say a word, nor did he reach for her. Her heart thumped in her chest. They’d flirted on occasion. His compliments and affection were always genuine. And for some goddamn reason, she wanted to up the stakes, see if the physical attraction was one-sided or not.
Tipping her chin up, she kept her eyes fixed on his, stomach dancing a nervous jig. Megan hadn’t gotten to where she had in life by waiting for other people to give her what she wanted. “I really want you to kiss me.”
“I know.”
His gruff response surprised her, causing a mixed reaction in her belly. Desire burned low in her core, and one corner of her mouth kicked up in a half smile. Before she could say anything, Ryan cupped her cheeks in his hands, and brought his face down to hers. For a moment, their breath mingled. Then his lips came down hard on hers, his kiss demanding she open her mouth to accept his passion. When his tongue invaded, her head swam.
She clutched at his forearms, kissing him back with equal abandon. Ryan pressed her back into the vehicle, his hard body dominating hers; captive with no wish to be free. He pulled back to break the kiss, then pressed his lips hard against hers before putting real distance between them.
Even though he’d created a good foot of space between their bodies, he continued to cradle her face in his hands. Megan blinked to clear the fog of lust from her brain.
Ryan arched a brow. “Satisfied?”
“Uh…yeah…” She cleared her throat to give herself a moment to gather her wits. Why had he made it sound like he’d offered her a treat she’d been craving? Well, I have been craving something… She hadn’t expected it to be so decadent. “Wow…you… You are…”
He remained silent awaiting her to complete her thought.
She inhaled a steadying breath. “You sure know how to dominate a kiss.”
He chuckled. “Nice choice of words.” His thumbs massaged her cheeks for a second. “And you submitted nicely.”
Confusion crinkled her brow, and she batted his hands away from her face. “Was this some kind of test?”
“You asked for a kiss, and I gave you one.”
His matter-of-fact tone irritated her to no end. She spun away from him, and opened the door to the SUV. “This isn’t a game to me, Ry. I really care about you. I care about us. If you’re going to grant me a kiss, then I want to know where I stand.”
He sighed, and stared off into the distance. “Let’s go home.”
“Fine.” She sat in the passenger seat, and slammed the door. Hot tears pricked her eyes, but she refused to let them fall. How could he not care when that kiss meant so much to her?
Ryan got into the car, and slammed his door. They sat in silence for a few seconds before he spoke. “Meg—I care about you a lot. I don’t know if a sexual relationship between us is a good idea.”
“And yet you kissed me. And smacked me on the ass.” She turned to face him, arms crossed over her chest again. “Those aren’t our regular forms of affection. If you don’t want to take things further, then don’t toy with me.”
“I do mean them.” Still without looking directly at her, he laid a hand on her thigh. “I like to be dominant in the bedroom.”
Megan gulped in surprise. Not the response she’d been expecting. Ryan a Dom? The thought had never occurred to her. She’d read about the BDSM lifestyle, met people who lived it to different degrees. She’d even gotten kinky in the bedroom on occasion, but she’d never considered herself a submissive. In her fighting career, the word submission didn’t enter her vocabulary. To submit, in her mind, meant giving in; giving in equaled losing. 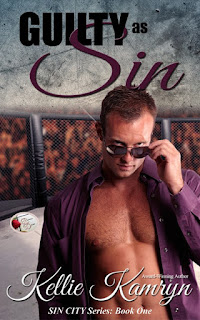 Guilty as Sin
Available Now! http://amzn.to/1JSDbVj
A UFC fighter caught up in the world of organized crime risks his one chance at freedom to save the woman he loves.
As a UFC fighter, Sinclair Reed aka Sinister 3, always had a plan. Getting tangled up with the mob, or falling in love with a woman he can’t forget, never factored into it.
After a brief affair, bestselling author, Cherie Bouchard, thought she’d seen the last of UFC light middleweight champ “Sinister 3” when they parted ways at the airport. Determined to discover if her feelings are real for Sinclair, or the result of her hopeless romantic imagination, she purchases tickets to his fight when the UFC comes to town.
As the lovers re-unite, they discover someone wants him dead, and Sinclair has twenty-four hours to choose between Cherie and freedom. For a smart guy like him, it should be a no-brainer. When it comes to the woman he loves, he’s as guilty as sin.


Award-winning author Kellie Kamryn is a retired elite gymnast and competitive coach. These days she is captain of her crew of four wearing many a hat: chauffeur, cook, maid, and arm chair psychologist, although her favorite title, and the one she answers to most, is “Mom”. Even with her busy life, she creates time for Baguazhang training twice a week, a challenging martial art form. While her friends would describe her as sweet, her readers know she’s got a sassy side, and with fourteen books and one anthology to her credit since 2011, most days she can be found channeling her sass into writing stories and poetry that sweep readers away into other worlds. When her muse requires a break, she channels her creative energy into bringing many a tale to life through her work as a narrator.
Winner of the RONE (Reward of Novel Excellence) Award for Best Erotica 2012, Kellie is also a workshop presenter, and motivational speaker, having presented at the Moonlight and Magnolias GRWA Conference in 2011. One of her latest books, Sugar Daddy Wanted: Now Accepting Applications, has been nominated for Best Novella in the RONE Awards for 2013.
Readers are welcome to join her on Facebook in her Sweet & Sassy Divas and Dudes group! It’s the first place she mentions contests, articles and much, much more! Come join in the fun!
Kellie is also a former columnist for Evolved World, now writing for The Aquarian Online, a Winnipeg print and e-zine dedicated to inspiring and bringing enlightenment to individuals.

a Rafflecopter giveaway
Posted by Jodi Redford at 7:00 AM 9 comments: Links to this post