Okay, I'm not sure if braggage is an actual word, but I won't tell if you don't. As promised, here is the shiny new blurb for my upcoming release, Light My Fire.

Double the firepower, triple the heat…

Aiden Fortune’s orders are clear: Find the woman, claim her as a sexual sacrifice—and share her with his horndog twin brother. Distasteful as it is, the Drakoni council insists the ancient custom be honored. Or Aiden will be banished.

One glance at Dana Cooper, and Aiden is thrown into the dragon version of a tailspin. Claim her? Hell, yes, he’ll claim her. Problem is, she has no idea her father signed away her destiny at birth.

Dana has dated enough whack-a-doodles to fill an insane asylum. Two gorgeous men claiming to be dragons? Par for the course. Until they give her a tantalizing glimpse of their inner beasts, which makes her think she’s the one headed for a padded cell—for actually considering their offer of the hottest sex of her life, for life.

Her resistance melts away under the onslaught of two men who pack enough heat to set off smoke alarms in a six-block radius. Especially when she realizes she’s falling for Aiden. But with a town full of dragon hunters and an enemy lurking in the shadows, surviving a week of Aiden and Jace’s double-teaming will be the least of her problems…

Warning: Contains two smokin’ hot dragons and their not-so-unwilling sacrifice. A few wardrobe malfunctions and inappropriate use of paintbrushes. You might want to have your local fire department on speed dial.


Light My Fire is scheduled to release on June 29. Why does that seem like a loooong time away?

But you know what isn't a long time away? Tomorrow. Yeah, pretty shocking discovery, eh? It just so happens that tomorrow my good friend and fellow Samhain author Ava March is releasing her delectably delicious M/M vampire romance, From Afar. Do yourself a favor and snag Ava's book. You won't regret it, she is a fabulous writer. To find out more about the book you can check out her website here. Be warned, you will be distracted by all the yummy man candy on Ava's site. ;) Amongst the other exciting releases tomorrow are the individual books in Samhain's space opera anthology--Impulse Power. There are three books total and I'm sure each one is fantabulous. And I'm not just saying that because my amazing editor--Sasha Knight--edited the anthology.

Okay blogosphere, did you hear my whoop of joy? Trust me, I'm pretty sure my neighbors did. Yes, I can officially announce that I will have a new book coming from Samhain Publishing sometime early this summer. I'll post more details and a shiny new blurb soon, I promise. Suffice it to say though, this is the sexiest book I've written yet and I'm already fantasizing what the cover is going to look like. Lol. Nothing like getting a little ahead of myself, eh? 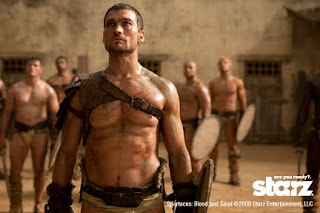 Yep, what's not to love about a bunch of scantily clad men fighting each other beneath the hot Roman sun? I admit it, I'm totally hooked on the new Spartacus series. Besides having some major eye candy it has my heroine...Lucy Lawless!! I was planning to dump the Starz channel but those bastards know how to get me. First it started with Showtime and the Tudors. Then HBO with True Blood. It's a conspiracy, I tell you. Anyone else suffering some serious addiction to television series?

Well, I'm very excited to report that I finally got my WIP finished and sent in to my editor. Now I get to look forward to stressing about whether she'll like it for the next several weeks. Yeah, I'm just a teensy bit obsessive that way. In the meantime, I've started work(or should I say gotten back to work) on a project I started a while back. I'll probably juggle that book with two other books that I've been chomping at the bit to work on.

In non writing related news, I've committed myself to watching the Superbowl this Sunday with some friends. I'm definitely not a fan of football, despite all the beefcake in tight spandex. The halftime show should be good though, and I always like watching the commercials. Speaking of which, my sister sent me a link to this leaked Budweiser ad. Freaking. Hilarious.