Win an ARC of Getting Familiar With Your Demon! 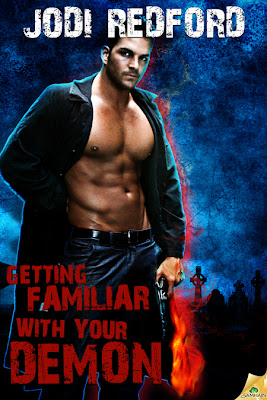 To celebrate next Tuesday's release of Getting Familiar With Your Demon, I'm giving away a digital ARC to one lucky winner! All you need to do to enter is leave a comment for me. Easy peasy. Contest is open to all, but closes Wednesday, February 22 at midnight EST. You MUST leave your email address in the comments section so I can contact you if you're the winner.

He should push her away…but he’d rather have his wicked way with her.

After too many years learning death from the inside out as the familiar of a voodoo queen, soul collector Samael Gorasola betrayed his boss, which landed him on demon death row.

He should have known not even his punishment would come easy, but the deal he’s offered to escape his fate stinks. Become the indentured servant to his despised enemy? No thanks, he’d rather be six feet under. With that in mind, he picks a deadly fight with two demon hunters, only to be rescued by one misguided, deliciously innocent white witch.

Marabella hasn’t a clue what possessed her to help Sam, particularly since he’s not the least bit grateful. She blames it on her overwhelming attraction to the dark, dangerous demon, and her exasperating quest to rid herself of the stubborn curse that guards her virginity. If the guild finds out, though, she can kiss her white-witch status goodbye.

A kiss is exactly what she gets, followed by a consuming hunger that breaks down all heavenly and earthly barriers…and leaves Sam saddled with the one thing he never wanted, a conscience, and a connection to Marabella that puts her soul on the line.

Warning: This book contains torturous use of disco music, one sinfully sexy demon who revels in being bad, a virgin witch whose innocence runs more than skin deep, and plenty of wicked, forbidden sex with explosive side effects—literally.
Posted by Jodi Redford at 10:22 AM 28 comments: Links to this post

Email ThisBlogThis!Share to TwitterShare to FacebookShare to Pinterest
Labels: Getting Familiar With Your Demon 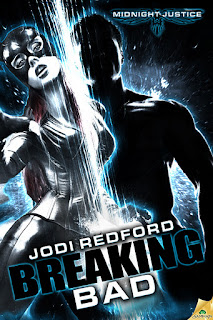 Are you a fan of hot, sexy superheroes? Action and adventure? Mind-controlling beverages? Hey, I judge not. Furthermore, if all of the above floats your boat, and you have a review blog, or post on Amazon and Goodreads, maybe you'd like to get on the review list for Breaking Bad, my contribution to the Midnight Justice anthology releasing from Samhain Publishing in May. I'll be sending ARCs out in March, so to get on the list shoot me an email at jodiredford@jodiredford.com.

Need further convincing? Read on for the blurb and excerpt.