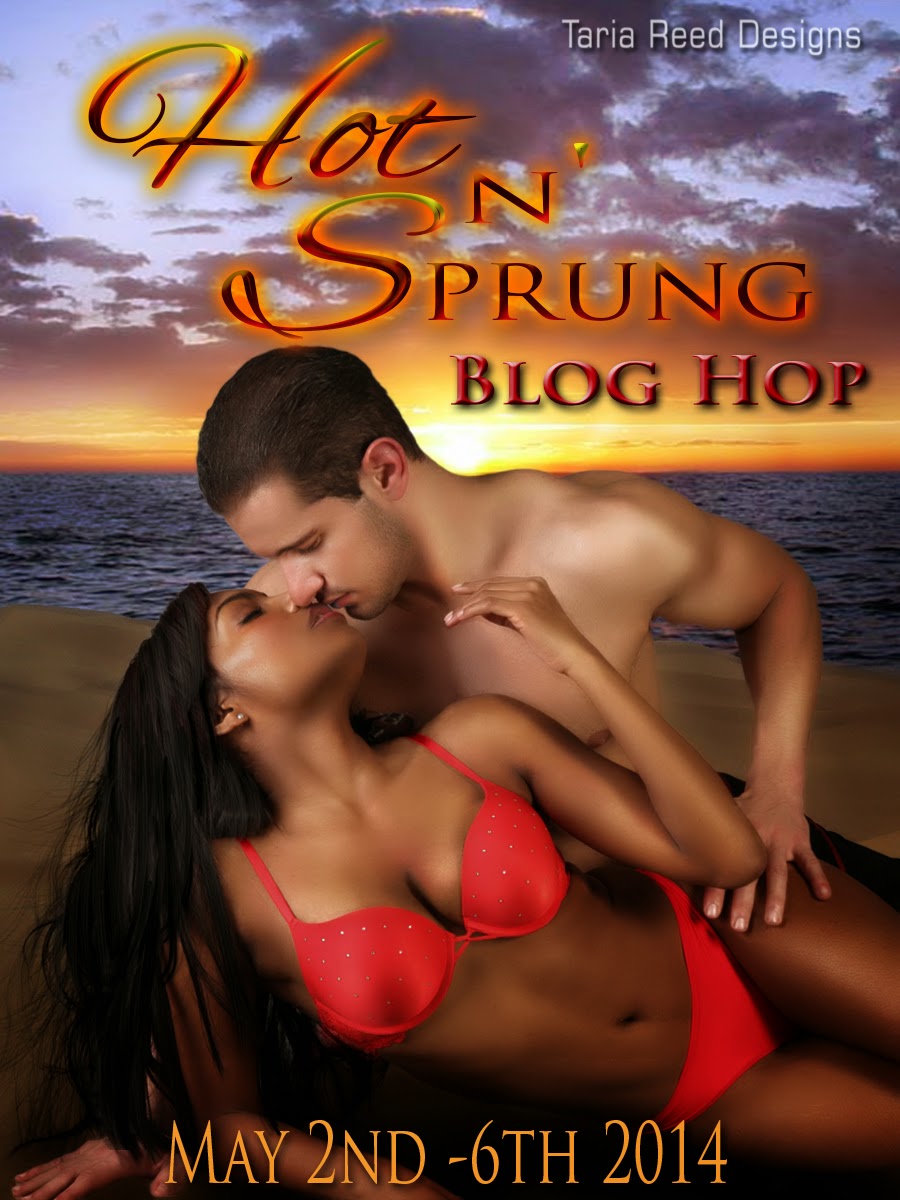 Hi everyone! Welcome to my stop on the Hot 'N Sprung Blog hop. For me, the top requirements for the perfect summer read come down to the three essential S's: Sand, Sizzle, and Smexiness. In one of my latest releases, Three Ways to Wicked, I made sure to cover all three of those bases, and also threw in a threesome for good measure. ;) Since I'm always on the lookout for a great summer read, sound off in the comments with your last favorite beach/ summer read for a chance at winning a digital copy of one of my backlist books. Contest is open to everyone, but closes at midnight May 6th. Don't forget to enter the Rafflecopter at the bottom of this post for the grand prize giveaways. Good luck! 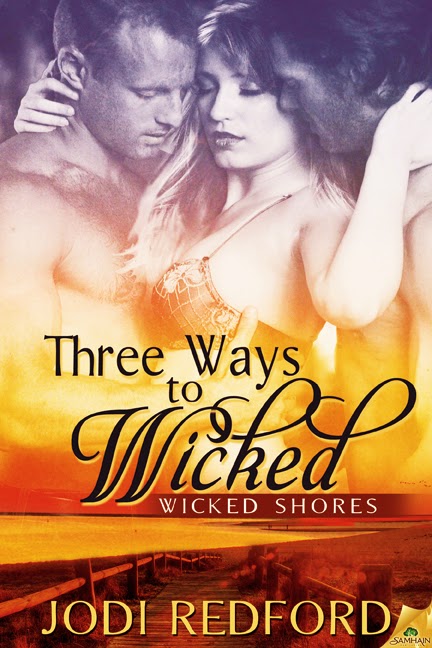 Solution? Two weeks of solitude in the Florida sun thanks to some friends’ generous offer to house-sit their place on the beach. She didn’t count on having roommates—or on getting the sexiest peepshow of her life.

Seven years after an intimate encounter rocked their worlds, business partners Tyler Bishop and Gibb Masters have kept things strictly in the friend zone. A recent storm has left them homeless, though. They figure moving into Ty’s parents’ place is preferable to roughing it elsewhere, even if it means resisting the temptation to slip between the sheets with Kayla…and each other.

As the days heat up, so does their three-way attraction. But when emotions run deeper than any of them expect, three wary hearts must decide if it’s worth the risk to write their own HEA.
Warning: This book brings the dirty. We’re talking dirty sex in an outdoor shower, on a boat, and on the kitchen counter with a dirty-mouthed Casanova. In other words, all the good stuff with a side of glow-in-the-dark body paint.


“You need to get laid. And I’m the owner of the eleven-inch cock that’s gonna take care of that little problem for you.”

Making a mental note to implement a mandatory no-guzzling-cheap-wine-while-writing-love-scenes policy, Kayla English winced and ejected the audio book from her car’s CD player. “Pass the crackers, because that’s some hellacious cheesiness.”

Then again, she’d gotten more fan mail than usual after Tori’s Torrid Secret came out last year. Maybe that line wasn’t a flaming pile of dog poop. Not like she could do a damn thing about it now anyway. It was forever immortalized in print, and soon to be audio, once she stamped her approval on the demo CD.

Hell, she was probably just grouchy because it’d been far too long since she’d gotten laid.
Before she could pull the plug on it, the phantom voice of her ex, Jeremy, reared its ugly head. You honestly expect me to believe you’re not a dirty whore?

Six months ago he’d flung those harsh, condemning words at her, but the gut-churning betrayal of his pronouncement still cut her to the bone like a fresh laceration. Nothing she’d said put a dent in his false assumptions. She wrote smutty books, therefore it stood to reason she must be a perverted, cheating slut, right?

A fist-sized ball of tension anchored in her belly, she grabbed her purse and the two bags of groceries resting on the passenger seat. Precariously juggling all three items, she nudged the Camry’s door shut and schlepped toward the steep stairway of the weathered beach house the parents of her best friend, Bailey, had generously loaned her for the next two weeks while they cruised around the Mediterranean.

It felt odd not staying at the sprawling mansion on North Shore, but she was grateful not to be faced with the heartbreaking remembrances of her dad and his last days there before he passed. Besides, her mom had made it perfectly clear that Kayla wasn’t welcome to darken her doorway anytime soon.

Familiar anxiety added to the queasy brew in her stomach. Sucking in a deep breath, she expelled it slowly, willing her tensed shoulders to relax. The crisp, salty tang of the ocean breeze ruffled her hair, doing its part to lessen the stress and uncertainty that’d been her persistent companions far too often lately. This working vacation was precisely what she needed. Respite from the memories of her failed relationship with Jeremy and her falling out with her mom. And hopefully an opportunity to kill her fears that she’d lost her passion for writing.

Even as she clung to that desperate hope, the taunting insecurities coiled inside her—a colony of poisonous asps biding their time.

Jeremy’s betrayal had gouged more than a chunk out of her heart. It was testing the foundation of her belief system. What she’d once held to be one unequivocal truth—that love always conquered all—was now riddled with mile-wide cracks. How could she write about love when she constantly questioned if it even existed? Right now, it seemed less believable than unicorns and Big Foot.

She trudged up the steps, careful not to stick the soles of her thin-heeled sandals with the few stray nailheads protruding from the wooden treads. Shuffling the bags again, she wedged the key into the lock and swung open the front door. She followed another small flight of stairs to the second landing. The sunny seaside décor of the large open living room jogged a contented sigh loose. “Exactly what I needed.”

Two weeks to rekindle her sexy writing mojo, beautiful Florida sunsets over the Atlantic, and soaking up some rays. Bliss. Beat the hell out of remaining holed up in her cramped apartment in Detroit while she banged her head against a wall trying to plot an outline for a new book that was going nowhere.

Shoving aside that last unproductive thought, she surveyed her surroundings with bittersweet emotion. She’d spent almost every summer in Wicked Shores during her youth. She missed those carefree days with an intensity that ached in her soul.

A silver-framed photo on a nearby end table caught her eye, and she crossed to it, drawn like a magnet. Appropriate comparison, once her full attention fell on the gorgeous male subjects centered in the picture. Tyler Bishop and Gibb Masters—leading stars of every single one of her girlhood fantasies.

Hell, who was she kidding? Ty and Gibb still made her quiver in inappropriate places. Her giddy, racing pulse and tightened nipples were all too happy to point out that obnoxious fact.

In the photo, the two men leaned on the rusted bumper of Ty’s old Jeep. Both wore faded cargo shorts, but that’s pretty much where the similarity ended. Dark-haired, sexy bad boy Ty could barely rein in his grin. No doubt he was thinking of all the lucky ladies he’d charm out of their panties later that night. In contrast, sun-kissed surfer god Gibb wore a slightly shuttered expression, as if he was reluctant to reveal too much to the camera lens. He’d always been the more reserved of the pair.

According to Bailey, her brother and Gibb had opened a charter fishing business in the Wicked Shores marina after Gibb’s marriage hit the skids and he moved back to the area. Which meant Kayla had a better-than-good chance of running into her secret crushes at some point during the next two weeks. Her only saving grace was the objects of her deepest desires knew nothing about her over-romanticized quest during her early college years to save her virginity for them. In her wildest fantasies, she’d concocted images of them fighting over the prestigious title of being her first lover.

God, how pathetic would she look if they knew any of that ridiculousness? Grimacing, she plunked the bags of groceries and her purse on the massive granite island in the kitchen.

After stowing the perishables in the fridge, she freed one of the Mike’s Lemonades from the cardboard caddy and twisted off the cap. A citrus-spiked effervescent hiss beckoning enticement, she swigged a refreshing sip and wiggled out of her sandals. She glanced toward the window situated above the sink and caught the blood-orange hues of the sun painting the distant waves. Her dad had always claimed this idyllic slice of the coast filled his writer pen with magic ink. Easy to believe. She only prayed it’d deliver the same benefit to her laptop keyboard.

Her toes soaking up the chill from the pastel peach tiles, she crossed to the sliding glass door overlooking the rear deck. A large in-ground pool took up a fair amount of real estate on the ground level. That was new. As was the adjacent pool house.

Quaffing a more satisfying swallow of the Mike’s, she hitched her attention to the left…and choked on the mouthful of alcohol when her gaze landed on the firm, wet, naked ass of a guy scrubbing himself briskly in the outside shower situated on the opposite side of the pool. The sun-bleached wooden doors were thrown wide open, awarding her an unimpeded, eye-popping view of rock-hard glutes flexing beneath the streaming cascade of crystal-clear water.

Posted by Jodi Redford at 11:30 PM 3 comments: Links to this post