Checking It Twice blurbage and a contest! 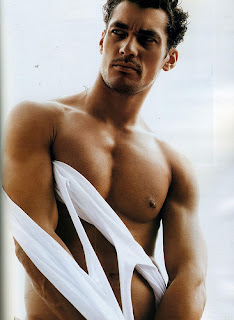 For all the readers who've asked if there will be any more books in The Naughty List world, I'm happy to say that Checking It Twice--Jana's book--will be releasing in late November! YAY! I don't have a cover to show off yet, but I thought I'd share the mancandy that inspired the two heroes, Kevin and Nick.


I know, David Gandy and Channing Tatum are such a hardship to look at. Please forgive me for subjecting you to their rock hard abs and pecs. Soon as I get some cover love I promise to share the goods.

In the meantime, how about a peek at the brand spankin' new blurb for Checking It Twice and a contest?


Tis the season for double seduction

The only item on Jana Colton’s Christmas list this year is Kevin Monahan. Preferably naked in her bed. The delicious, hunky chef has been resisting her forever, but she’s pulling out all the sexy stops this holiday. Especially since his acceptance of an out-of-state job threatens to nix her quest to rock his boxers off.

Jana has always been Kevin’s personal Kryptonite, but giving in to her isn’t an option. Relationships are a four-letter word in his book. He cares far too much for Jana to let his emotional baggage ultimately break her heart.

With the arrival of his best friend, Nick Pappas, the balance of temptation shifts. From their past history of sharing women, Nick knows every dirty trick it takes to lead Kevin astray, and he’s not afraid to use them. Particularly since Nick’s convinced that Jana is exactly what Kevin needs to be happy and whole.

Their game of seduction quickly snowballs into something that feels an awful lot like love—in triplicate. But with Kevin dead set on leaving Michigan, there’s a real possibility it could be a blue Christmas for them all. 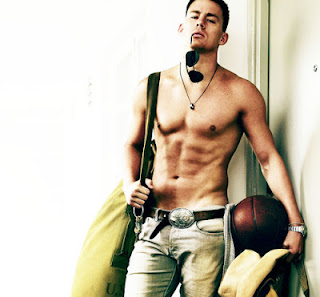 Warning: This book contains an extremely tormented voyeur, a very naughty and not so saintly Nick, a liberal application of candy cane-flavored body paint, a buzzing butterfly, and enough raunchy fun on a sex swing to melt a snowman…or two.

And now for the contest! What can you win, you ask? How about a digital copy of The Naughty List (or another of my backlist if you already have TNL)? But hold on, my pretties. In addition to that, the lucky winner will score an ARC of Checking It Twice once I get the final ARCs. How freakin' sweet is that? Since the book is still in edits, I don't have a firm date yet, but I guarantee the winner will get bragging rights of reading the book before anyone else (aside from me, my editor, the final line editor, and Stan, my drunk orangutang assistant. Who by the way, gave it two hairy thumbs up. And that was without me bribing him with Jägermeister, in case you were wondering.) To get in on this extraordinary opportunity, all you have to do is one of the following:

A) Leave a comment telling me what the last sexy book you read was. Doesn't have to be one of mine. But ego stroking is always welcome and encouraged. ;)

C) Sneak into the locker room at Joe Manganiello's health club and snap a pic as he's getting out of the shower. *side note--don't use my name when the cops come to arrest you. Trust me on this.*


D) Cage wrestle a velociraptor. *side note--I require photographic evidence for this one. And dressing up your dog in a Barney costume won't fly anymore. I'm on to you people.*

That's it! Easy peasy. Contest is open to everyone, but closes midnight on June 2nd. One entry per person, and please leave an email addy for me to contact you if you're the winner. Good luck, everyone!

Posted by Jodi Redford at 4:53 PM 12 comments: Links to this post

Email ThisBlogThis!Share to TwitterShare to FacebookShare to Pinterest
Labels: Checking It Twice, contest

It's release day for Breaking Bad! 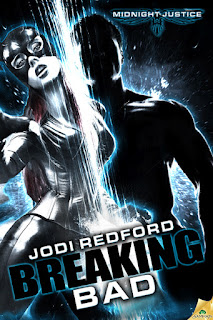 It's release day for Breaking Bad, and the other two books in the Midnight Justice anthology! Make sure to check out SuperLovin' by Vivi Andrews and Blade of Moonlight by Kimberly Dean.

Want to check out a review for Breaking Bad? The always hilarious Kelly aka/ Soulswallo has a fun one posted over at Reading the Paranormal.

It’s been twenty-five years since the last Light Guardian was wiped out. Or so it’s believed. Ruby Winston is about to blow the lid off that theory, even though it’ll bring every Shadow Czar minion down on her ass.

She’s always known she was different from the rest of the evil-dictators-in-training Winstons. Uncovering the secret half of her gene pool proves it. Now she’s out to bring down her late father’s mind-control soda empire—and break the Shadow Czars’ hold on Earth.

Problem is, becoming a superhero overnight isn’t as easy as it looks.

Teague Younger has his own secrets to keep: his heritage, and his fierce determination to exact revenge on his friend and mentor’s murderer. So far he’s kept his cover—until he’s forced to use his Light Guardian powers to save Ruby from a sticky situation.

Thrust together and on the run, Teague and Ruby form a wary alliance as they desperately fight their circuit-blowing attraction. With an army of Shadow Queen minions hot on their tails, they might have a hard time surviving the night, much less ignoring their hearts.

Warning: This book contains mind-controlling beverages, evil dictators and minions, excessive use of spandex, and enough electrifying sex to melt an ice train.

Teague stalked toward a cluster of scrub pines in the distance. He halted a good thirty yards back from the trees and waved his arm. “Let’s see what you’ve got.”

“You might not even get this close to the queen before she fries your ass.”

Her stomach clenched. Determined to prove to them both that she wasn’t entirely inept, Ruby lifted her shaking hands and directed a bolt toward the shrubs. The charge hit at least ten yards short, fizzling ineffectually into the parched dirt.

She repeated the maneuver, this time landing the strike even farther from the target. Embarrassment and defeat caved her chest.

“I am. I’ve been aiming for that middle tree each try.”

“I’m not talking about outward focus.” He moved behind her. “It’s as much about the mental as physical. To properly handle your energy, you first need to understand it. Connect with it.” His warm, calloused palms glided along her arms, positioning them in a straight horizontal line. “This is the best way to ground yourself. The energy resides as much within your environment as it does inside you.” His fingertips grazed the sensitive undersides of her forearms, causing her to shiver in pleasure. “Do you feel the build-up starting?”

A sharp tingle shuttled through her clitoris. Oh yeah. She was definitely feeling something. Probably not what he’d been referring to though. “I—I’m not sure.”

Teague pressed into her, the firm, muscular planes of his chest and abdomen contouring to her back like the delicious, masculine version of memory foam. “How about now? Feeling anything?”

She gulped, not entirely certain he wasn’t referring to the thick bulge of his erection prodding the base of her spine. “Err…possibly.”

“Good.” His hands coasted along her upper arms and over her shoulders. He continued following the slope of her neck, his fingers a maddening butterfly dance along her overheated skin. She shook as he traced the shell of her ears before combing his fingers through her hair, sifting the strands over her shoulders. His deep inhalation stirred the fine hairs at her temple, and she closed her eyes on a shaky breath.

“Do you feel it, Ruby?” His hands retraced their path, this time moving beneath her arms. “Do you feel our energy weaving?”

Unable to believe her own eyes, she released an excited whoop of joy. It took a moment to realize that Teague was no longer touching her. Disappointment smothered her brief happiness. Pivoting, she met his guarded expression. Painfully aware of the tight ache in her nipples, she hugged her torso. “You stopped.”

“It was the end of our first lesson.”

She frowned. “That was a lesson?”

“Our energy often brings with it a sexual charge for us. Tap into that essence, and it can trigger a power surge similar to a climax.”

Her cheeks heated. “I thought you were touching me because you wanted me.”

A dark intensity entered Teague’s eyes. “I want to fuck you so badly, my balls are blue. But giving in to that urge would be stupid.”

Heaviness sat like an elephant on her chest. “Why?”

“We’re as different as two people can get, Ruby. You want to save the world, and I just want revenge and to save my own ass. You’re better off without me.”

“Don’t I get a say in this decision?”

“No. One of us has to keep some damn sense.” His jaw locked into a rigid line, Teague strode past her and headed to the copse of trees.

She stared at his retreating back, the ache in her heart increasing with each step he took away from her. He should be the last person on Earth capable of tying her emotions into a tangle of messy knots. He was absolutely right about them being wrong for each other. The smartest thing she could do right now was walk away.

Her legs wobbly, she started across the dusty plain, her unwavering sight set on Teague. She reached the ring of trees, and he turned to face her, his mouth a grim line. “Ruby—”

Planting her palms squarely in the center of his broad chest, she shoved him against the trunk of the nearest oak. “You said what you had to say. Now it’s my turn.” Before he could interrupt or argue, she stood on tiptoe and caught his bottom lip between her teeth. A harsh breath rattled from his lungs, and she slid her hand behind his neck. The next second, the lush, wet heat of his tongue thrust inside her mouth as he grasped her ass and hauled her up against him. Locking one leg around his waist, she rubbed against his thickening erection and whimpered.

Re-angling his mouth for a deeper, hungrier kiss, he swung her around until her back was the one pushed against the rough bark of the tree. Gripping her thigh higher, he ground his pelvis into hers. The friction tore a moan from her throat. Scraping his teeth along her jawbone, Teague slid a hot, open-mouthed kiss toward the sensitive crook of her neck.

Her insides melting, she shivered. She wanted nothing more desperately than to feel the thick, hard length of his cock slide deep in her core, filling the emptiness and banishing her ever-present worries for a blissful moment. “Please, make love to me.”

A tremor racked Teague’s body. She sensed the tension in him. The struggle for his control. She gyrated her hips, earning his rasping groan. “Damn it, Ruby. I’m not fucking you against this tree.”
She pulled him in for another devouring kiss and gloried in the lusty moan that rumbled through his chest. His hand slipped between them and fumbled with her zipper. An instant later his palm was cupping her mound and two fingers were buried in her pussy. She gasped at the unexpected stretch. “That isn’t what I want.”

Ignoring her, he pumped his fingers and ghosted his thumb over her clit. She sank her nails into his rock-hard biceps and fought for breath. “N-not this way.”

He increased the pressure on her inner walls, hitting the sweet spot that brought stars dancing in her vision. She bowed her back, trying to stave off the approaching climax. His gaze hot with determination, Teague hooked his fingers, his aim precise and devastating.