Light My Fire is now out! 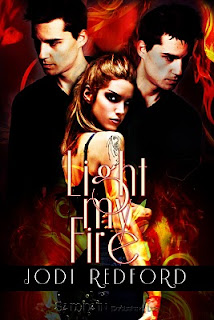 Double the firepower, triple the heat…

Aiden Fortune’s orders are clear: Find the woman, claim her as a sexual sacrifice—and share her with his horndog twin brother. Distasteful as it is, the Drakoni council insists the ancient custom be honored. Or Aiden will be banished.

One glance at Dana Cooper, and Aiden is thrown into the dragon version of a tailspin. Claim her? Hell, yes, he’ll claim her. Problem is, she has no idea her father signed away her destiny at birth.

Dana has dated enough whack-a-doodles to fill an insane asylum. Two gorgeous men claiming to be dragons? Par for the course. Until they give her a tantalizing glimpse of their inner beasts, which makes her think she’s the one headed for a padded cell—for actually considering their offer of the hottest sex of her life, for life.

Her resistance melts away under the onslaught of two men who pack enough heat to set off smoke alarms in a six-block radius. Especially when she realizes she’s falling for Aiden. But with a town full of dragon hunters and an enemy lurking in the shadows, surviving a week of Aiden and Jace’s double-teaming will be the least of her problems…

Warning: Contains two smokin’ hot dragons and their not-so-unwilling sacrifice. A few wardrobe malfunctions and inappropriate use of paintbrushes. You might want to have your local fire department on speed dial.

Posted by Jodi Redford at 2:38 PM 3 comments: Links to this post

Email ThisBlogThis!Share to TwitterShare to FacebookShare to Pinterest
Labels: Light My Fire blurb

Look for me tomorrow at...

Tilly Greene's blog, where I'm giving away a $10 GC to My Bookstore and More. Leave a comment and you'll also be entered into Tilly's giveaway for a pink Sony ereader! Just click on the banner below to reach Tilly's site.

I'm also going to be at Melissa Schroeder's blog tomorrow, giving away a download of Light My Fire. Stop by for your chance to win the book and be entered to win the ereader Melissa is giving away at the end of her Summer of Love contest. http://www.melissaschroeder.net/blog/
Posted by Jodi Redford at 2:36 PM 3 comments: Links to this post

I am so thrilled to announce that I will have a new book coming from Samhain Publishing in October! That Voodoo You Do is a very hot paranormal romance featuring a witch, a shape-shifting tiger, a werewolf, and a demented ghost voodoo queen intent on waging a zombie apocalypse. This is the first book in a planned series, and trust me, there's going to be a lot of fun and magical stuff centering around this world. As soon as I have an official blurb I'll post all the blurby goodness.
Posted by Jodi Redford at 5:28 PM 2 comments: Links to this post

I've decided to throw a little contest in celebration of Light My Fire releasing on June 29th. If you're interested in a shot at some dragon swag and and ARC of LMF, check out my contest page here.

And just because I'm in a sharing mood, here's a hot little excerpt to whet your appetite. Warning, this is a full-on menage scene.

Aiden sank behind her onto the sleeping bag, the nylon material whispering a sensuous sigh. His radiant heat reached her before his skin did. Pressing his chest against her back, he branded her with all that toasty warmth, coaxing a purr of pleasure from deep in her throat. His fingers wrapped in her hair—not exactly gentle but also not rough to the point of pain—and tipped her head back. She caught the briefest flash of fire in his irises before his mouth claimed hers in a hot, possessive kiss.

She’d sensed the beast lurking within Aiden, but he’d always kept it in check. This time the dragon would not be denied and made its presence known. She felt its dominance, its mastery, in the hands holding her hostage. In the tongue plundering her mouth. And she loved it.

Dear God, how she loved it.

Writhing against Aiden, she bit at his bottom lip, a strange desperation clawing at her to please both man and beast. He groaned, and giddy triumph raced through her. Their tongues rasped together, a marked contrast to the soft flicker Jace was employing on her nipple. Friction taunted every pleasure point in her body. Even Aiden’s thigh and the crotch of her jeans did their part to add to the torment, forcing her damp panties to ride against her clit, making her squirm.

Emboldened by the fever lust rocketing through her veins, she groped around blindly until she encountered their rock-hard erections. She stroked the velvet-sheathed steel of the twin shafts, earning a guttural groan from Aiden and Jace. Her fingertips swirled over the silky heads of their cocks and encountered the pre-come weeping from both slits. Taking advantage of the natural lubricant, she slicked up and down their lengths, pumping faster. Almost in unison, they clamped onto her wrists, halting her. She groaned in frustration.

“Patience, baby.” Ducking his head, Jace traced the bow of her mouth with his tongue. “I want to watch my brother sink balls-deep into your sweet pussy while you suck me.”

Aiden’s harsh inhale ruffled her hair and she felt the rapid thud of his heartbeat against her shoulder blade. Both were strong indications that he not only liked Jace’s suggestion, he was fully on board with making it happen. But was she?

Her clit throbbed in anticipation. Guess that answers that question. Reluctantly, she released their cocks. “I—” She struggled to moisten her suddenly dry mouth. “I want that too.”

Jace’s eyes darkened and Aiden’s heartbeat pounded faster against her skin. She reached for the button on her jeans but Jace brushed her clumsy fingers aside. His tongue parted her lips, delving inside while he freed the button and eased her jeans down her hips. She scooted onto her rump so he could remove her tennis shoes and pull her pants the rest of the way off. Aiden leaned over her. Feathering a lock of her hair aside, he kissed her with exquisite tenderness as Jace slowly dragged her panties down her legs. Jace’s finger dipped inside her and she gasped, arching her back.

“So wet and tight. You are one lucky bastard, bro.” Jace crooked his finger, hitting her G spot while his thumb brushed over her swollen clit. A strangled cry lodged in her throat and she clutched frantically at Aiden’s bulging biceps. Lifting his head, Aiden revealed a face flushed dark with determination and passion. A muscle twitching in his jaw, he glanced at Jace. Without verbalizing a single word, Jace ducked beneath the edge of the sleeping bag and picked up a small foil packet. He flipped it toward Aiden.

She stared at the condom wrapper before glaring at Jace. “Presumptuous much?”

He hitched his shoulder with a chuckle. “More like hopeful.” Grasping her hands, he helped her up, not quite distracting her from the sound of foil ripping behind her. She imagined Aiden smoothing the condom over his cock. Imagined that thick cock sliding deep inside her pulsing core. Her breath quickened.

Jace sat back on his haunches and stroked his erection, reminding her that he was the proud owner of a very nice package of his own. She licked her lips.

“Sweetness, you giving me a preview of what you can do with that tongue?”

She gave a coquettish bat of her lashes. “Wouldn’t you like to know?”

“Fuck yeah.” He leaned forward and nibbled her bottom lip. She paid him back by capturing his tongue and sucking it between her teeth, providing a mock demonstration of what she had in store for him. A drawn-out moan that was too sexy for words shuddered from Jace. They broke the kiss and he stared at her. “Damn.”

Poking a finger in the center of one of Jace’s sculpted pecs, she scooted him backwards. “I need a little working room here, fella.”

He happily complied and she dropped onto all fours. For a moment she suffered a bout of self-consciousness about giving Aiden a bird’s-eye view of her generously proportioned butt. Oh, hell with it. Pushing her female insecurities aside, she contemplated the gorgeous cock bobbing in front of her face. Using only the tip of her tongue, she traced the prominent vein running along the underside of his shaft. Aiden had seemed to really like it when she did that to him, so odds were good that Jace would too. Reaching the mushroom-shaped cap, she delicately licked the glistening drop pearling from the slit. Jace’s abdomen quivered and tensed.

Oh yeah, he most definitely liked it.

She took Jace all the way into her mouth, the fat knob of his dick hitting the back of her throat just as Aiden eased two fingers into her. The sensation was so unexpected and breathtakingly good that she inhaled hard and almost choked on Jace.

She barely registered Jace’s concerned tone. Closing her eyes, she concentrated on the fingers stretching her open, making her ready. Wet, succulent noises came from her pussy, verifying that she was more than ready for everything Aiden had to give her. She pushed backward, mindlessly riding his hand, wishing it was the thickness of his cock filling her instead. Sliding her mouth off Jace, she sent Aiden a desperate stare over her shoulder. “Please. I—I need you to—” She swallowed, trying to focus, trying to shove the words past her lips. “To take me. Now.”

Aiden’s eyes glowed with an intense blue fire. Growling, he fisted his cock and rubbed its latex-sheathed head against her slit. He skimmed along her labia and prodded her sensitized clit. Her entire body jolted at the contact. “Ooh.”

Jace cupped her jaw, bringing her attention back to his waiting erection. Disoriented, she bobbed at him and missed. Steadying her, he guided his shaft past her lips. He tasted wonderful, musky with a slight salty tang from the pre-come flowing freely, but all she could think of was Aiden and his wicked taunting.

Panting, desperate and needy for the first thrust she knew was coming, she waited.

Impatient, she reached for Aiden. His fingers cuffed her wrists, holding her immobilized. The sense of powerlessness sent a shock of excitement careening through her. Aiden nudged at her opening again, this time with obvious intent. The delirious grunts coming from her throat probably should have embarrassed the hell out of her. Thank God she was too blindsided by lust to care.

Aiden’s furnace-like heat blanketed her back, his tongue tracing each vertebrae of her upper spine as his cock teased her slippery folds. His lips reached her shoulder and his teeth grazed her skin. A love bite to mark his territory? He released one hand and briefly danced his fingers across her clit before he eased inside her in agonizingly slow increments. She bucked wildly and he canted his hips back, denying her silent plea. The bastard was bound and determined to drive her insane.

In sharp contrast to Aiden’s leisurely conquering of her body, Jace’s movements sped up, the silky gland of his cock tunneling toward the back of her throat. On his retreat, she lightly scraped her teeth over the plump head.

A hiss broke from Jace. “Fuck. Sweetness, you’re killing me.”

She hummed around Jace and he jerked in response. He tightened his hold on her hair, his grip sending a tiny sting through her scalp before his fingers flexed and relaxed. Aiden chose that moment to thrust the final few inches of his shaft into her, filling her completely on one languorous glide.

Posted by Jodi Redford at 6:14 PM 3 comments: Links to this post