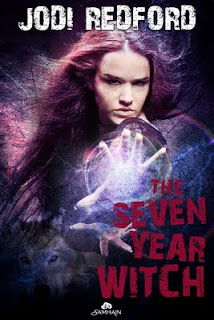 Today is the official release day for The Seven Year Witch! I'm so happy and excited to finally have Clarissa and Logan's story out there for the world to see. This book was truly an emotional roller coaster for me to write and it holds a special place in my heart. Because of this being release week, I'm at a few places giving away some pressies. From now through Thursday, you can find me and Logan at Among The Muses, where you can win a $10 gift certificate to Samhain Publishing. Tomorrow I have a Launch Party over at Author Island. I don't have an official link to that yet, or the release party I'll be participating in at The Romance Studio on Thursday, so keep an eye out for those tomorrow.

In the meantime, here's the blurb and a naughty little excerpt.

After this much foreplay, something’s bound to combust.

But her resolve is vanishing—fast. Seven years ago she sold her soul to save her father, and that contract is coming due. The allure of spending her last days indulging in some dirty, naked loving is too tempting to resist.

Logan has patiently ridden out the past seven years, content to do Clarissa’s bidding and ignoring his consuming need to mark her as his. Now that the ban on witch/familiar fraternizing has been lifted, he’s off the leash and ready to launch a full-on sensual assault on her defenses. They’re destined mates, and he’ll do whatever it takes to convince her.

It’s delightfully easy to get her in bed. Get at her heart? Not so much. Especially when a deadly predator stakes its claim on her…and Logan faces a battle not only to win her heart, but save her soul.

This book contains a villain with more personalities than Sybil, a witch in search of redemption and a dirty-talking werewolf hell-bent on claiming his mate in every wicked, sexy way possible. Spontaneous howling may occur.

Logan stepped into the service entrance of Tatum’s and bypassed the kitchen, following the corridor to the main section of the restaurant. He coughed, nearly hacking up a lung as the acrid smoke from what undoubtedly amounted to ten thousand packs of cigarettes ambushed him. His heightened lupine senses always made walking into a bar a dicey prospect.

Steeling himself, he strode toward the jam-packed bar. After elbowing a path through the throng and requesting a beer from the bartender, he moseyed out of the way and scoped the room for an available seat. The majority of tables close to the stage were already taken, but he spotted a vacant booth that still afforded a decent view.

Hoping to sweet talk his way into the primo spot, he swiveled toward the hostess stand, only to slam to a standstill when he spied Clarissa sitting at a table near the back of the dining room. She wasn’t alone. Even while his brain scrambled to process that disturbing revelation, he watched the stranger’s hands bracket Clarissa’s face, right before the guy leaned in and kissed her.

Numb disbelief froze him. What. The. Fuck.

Jealous fury detonated inside him, instantly eradicating every thought but the one screaming in his mind—the fucking asshole had his tongue rammed in Clarissa’s mouth. His woman.

Fists balling in preparation of punching the dickwad’s nose off kilter, Logan growled low in his throat and stalked in Clarissa’s direction. A seat suddenly swerved in front of him, almost jabbing him in the hip. He snarled at the clueless guy straddling the chair before shoving the seat out of the way. Ignoring the guy’s sputtering retort, Logan jerked his focus back to Clarissa. And did a double take.

He took a quick scan of the dining room, not seeing the dickwad anywhere. It was almost as if the dude had vanished into thin air. Another possibility knocked against his consciousness and he grunted. Or maybe I imagined the whole thing. The idea wasn’t completely out in left field. Fuck knows this obsession with Clarissa had messed with his head on more than one occasion. Tunneling a shaky hand through his hair, he continued forward. When he was less than two table lengths away from Clarissa, she looked up and locked stares with him. Every ounce of color leeched from her face. Her gaze darted sideways, toward the back hallway, and he lengthened his stride, fully intending to tackle her if her butt so much as inched off her chair.

Apparently reading his intention, Clarissa muttered beneath her breath. He didn’t need to be a lip reader—or rely on his acute hearing—to make out the words “Fuck me.”

Her irritability, along with her choice of words, stirred the wicked beast within him. Drawing to a halt at her table, he awarded her his best wolfish smile. “Just name the time and place, shug.”

“You know damn well that isn’t what I meant.”

“No? Because I’m thinking that’s precisely what I’d like to do.”

Her cheeks bloomed with a vivid splash of red. “I’m not in the mood for this tonight.”

Clarissa’s testiness only managed to rekindle his anger. “Well, now, I’m real sorry you feel that way, shug. ’Cause the last thing I’d wanna do is piss on whatever urgent plans preempted our dinner tonight.”

“There’s no need to be a prick.” She stood, her eyes narrowing as he strategically blocked her path. “Or make a scene. Please move.”

“What are you gonna do if I don’t? Whammy me? Might be kinda hard explainin’ that one to everyone here, darlin’.”

“Logan, please.” Her voice broke on the last word, stunning him. She glanced down, but not before he caught the faint glimmer of moisture in her eyes. The sight hit him like a sucker punch in the gut, making him feel like the prick she’d accused him of being.

If there was one thing guaranteed to shred him to pieces, it was a woman’s tears. Having that woman be Clarissa only made it a thousand times more terrible. “Clarissa…”

Without saying another word, she rushed past him and hurried toward the rear hallway. Even her strongest holding spell wouldn’t have kept him from chasing after her.

He caught up with Clarissa before she could duck out the door or into the ladies’ restroom. Not that either location would have deterred him. He tugged her into his arms, the ferocity of her expression revealing just how much she hated showing the vulnerability hidden beneath that legendary icy exterior she’d perfected. Tucking her against his chest, he nuzzled her forehead. “Rissa, I’m sorry.”

She stiffened. “Please don’t call me that. I—it’s very inappropriate.”

“Hush.” Unable to help himself, he followed the delicate, silky arch of her eyebrow with his lips. She trembled and sighed, making both man and wolf silently growl in triumph at her tiny show of capitulation. Holding her this close was both heaven and hell, a heady torment that teased every single one of his heightened senses. She smelled luscious and feminine, a delicious main course he could easily feast on all day and night. His hands slid down the slopes of her shoulders, a not entirely unconscious marking of his territory.

Her breath stuttered in her throat. “This isn’t the place to be doing this.” She must have caught her slip of words because she jerked her gaze up to his. “I mean we shouldn’t be doing this at all.”

Tuning out her weak protest, he traced her mouth with the pad of his thumb. “That’s where you’re wrong. Right now, I need to kiss you more than I need to breathe. I wanna taste you. Eat you up.” Make you mine. The thought sprang full born from the most primal part of him, where wolf overruled man.

Clarissa’s eyes widened, but she didn’t draw back as his head descended. Their lips met, clung briefly, before he gave in to the fierce hunger burning low in the pit of his gut. Intent on making his possessiveness—and his desire—known, he nudged the hard ridge of his erection between her thighs. “Feel that, baby? That’s what you fuckin’ do to me.”

He filled his palms with her ass and squeezed, deliberately rolling his hips against hers. Yeah, he was dry humping her against a wall right outside the damn restrooms. But if the frequency of her gasps were any indication, she was enjoying the hell out of it just as much as he was.

His tongue slicked past the nonresistant barrier of her lips, and he relished the soft, breathy moan that escaped Clarissa. She was even more intoxicating than he remembered. Her magic shimmered around them, mingling with his energy and creating a charged buzz that tingled across his skin. He broke off the kiss, his breath ragged against her cheek. “Come home with me.”

She licked her lips. “That would be an epically bad idea.”

“Because we both know where it would lead.”

He ducked his head and nibbled a path along her jaw before exploring the soft hollow behind her ear with the tip of his tongue. “If you’re referrin’ to you tied to my bed, then yeah, damn straight.”

Her shallow exhale whispered against the side of his face. “Th-that’s not what I…” She swallowed. “You want to tie me to your bed?”

“More than you could imagine. God knows I’ve imagined it more often than I can count.” He released the tempting swells of her ass and glided his palms up along her hips, taking his time to properly enjoy her lush curves. “You’d be spread-eagled, your whole body tremblin’ and your nipples unbearably tight.”

“W-why would I be trembling?”

He grinned against her neck. “Don’t you also want to know why your nipples are tight?”

“I figured you’d get around to telling me, regardless.”

“Aw, shug, am I that predictable?” Yeah, he was. No way in hell he could temper the urge to tell her everything he wanted to do to her. In precise, Technicolor detail. “You’re tremblin’ because I’m eating your pussy. Lickin’ you inside and out, nice and slow. Savoring you.”

Her pulse skittered beneath his lips. “Logan, please—”

“Yeah, those are exactly the words you keep repeatin’ while my tongue is workin’ your clit and your sweet honey is filling my mouth.” He groaned and shifted, resting his forehead against hers. The fantasy had him hard as granite and desperate to sink into her softness. “Christ. Have mercy on me, Rissa. Say you’ll come home with me.”

Email ThisBlogThis!Share to TwitterShare to FacebookShare to Pinterest
Labels: The Seven Year Witch 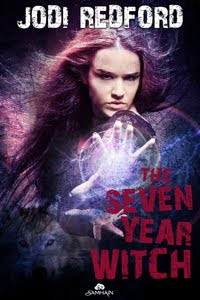 It's just a week away for the release of The Seven Year Witch. Squee!!!! Okay, now that I've got that out of the way...how about a shot at winning an advanced read of Clarissa and Logan's book? Just visit my contest page here for all the details and to enter. But hurry, I'm closing the contest tomorrow at midnight.


And because Logan and I love The Black Keys and this awesome vid...

Posted by Jodi Redford at 2:02 PM No comments: