I'm a day late in announcing it, but I just contracted a new project with Samhain Publishing. This book is two firsts for me. My first novella, and my first M/M/F. I blame all the scrumptious man candy over on Ava March's blog for inspiring the M/M part. ;) I'm still in the middle of writing the novella, so no blurb as of yet. But I do have a title--a small miracle, seeing as how those often don't come to me until the book is nearly done. Anywho, Vanessa Unveiled features Vanessa, a bounty hunter who goes after Otherworlders that illegally jump the dimensional veil, and Rand and Braeden--the two sexier-than-should-be-legal pookas she's been assigned to bring in. Hot naughtiness ensues when Rand and Braeden turn up the heat in order to convince Vanessa she's their bond mate.

I don't have a release date yet, but word is it'll be coming out sometime in February of 2011. Woo Hoo!
Posted by Jodi Redford at 1:12 PM 2 comments:

I was skulking the Coming Soon pages over at Samhain--yeah, I know. I'm just a little obsessive about that--and saw That Voodoo You Do not only has its cover up, but also an excerpt. Yay! Here's the link if you'd like to check it out. But in the spirit of sharing, I thought I'd also post a hot little excerpt right here. Hope you enjoy. ;)

That Voodoo You Do
Copyright © 2010 Jodi Redford

“So what’s going on in there?”

propped his elbow against the frame, giving her a close-up view of his barbed-wire tat. Now that she thought about it, the symbolism seemed appropriate. Tangling with the lusty werewolf was bound to leave a few scratches. “Just Clarissa taking care of some coven business. Nothing for you to worry your pretty little head over, darlin’.”

She narrowed her eyes. “That managed to be both evasive and sexist.”

“Damn, and here I wasn’t even tryin’.” He chuckled. Taking advantage of his momentary distraction, she reached around him for the doorknob. He scooted sideways, forcing her hand to smack into his abdomen instead. His bare, firm-as-marble abdomen. Her fingertips brushed the warm hollow of skin resting just above the low rise of his button fly. Sucking in a sharp breath, she yanked her arm away and shuffled back several steps.

“I, uh, just have to go and…um…yeah.” She spun and stumbled in the direction of the kitchen before she did something really stupid, like follow the silky trail of hair disappearing beneath the waistband of ’s jeans. With her tongue. That thought sent her tripping through the entry of the kitchen. She jerked to a halt when she spotted Griff in front of the stove, stirring the contents of a large stockpot. He was notably shirtless too, which put the mouthwatering expanse of his back on dazzling display. She stared at the muscles shifting beneath all that golden, velvety skin, her suspicions bubbling. It was too damn weird and convenient that both Logan and Griff were standing around half naked all of a sudden. Unless some devious shirt monster was making its rounds in the neighborhood, there was definitely something afoot.

And where was everyone else, anyway? She craned her neck, scoping the dining alcove for signs of Ms. Peach or Gloria.

“Hey, baby. You’re just in time for a taste test.”

She whipped her head around at Griff’s zippy tone. Now she knew something was up. Griff didn’t do chipper, particularly not thirty minutes after snarling at her like a pissed-off Tony the Tiger. “What the hell is going on?”

Griff tried for a guileless look. Oh yeah, he didn’t do innocent well either. “I’m getting lunch ready.”

“Without your shirt on?”

Well…that was certainly true. Even without Griff’s muscle-icious torso making her girl parts all warm and tingly, there was no denying the temperature in the kitchen hovered between muggy and melt-your-panties-off miserable.

Griff dug a spoon out of the drawer and ladled some of the sauce he’d been stirring. “Tell me if this needs anything.”

Her intuition warning her to be on the lookout for any sneakiness, she hesitantly crossed to the industrial-sized, stainless-steel stove. She tried to wrestle the spoon from Griff, but he insisted on feeding her the concoction himself. Almost from the instant the tapestry of flavors met her tongue, a seductive ripple of heat unfurled inside her, tightening her nipples beneath the sundress’s snug, smocked bodice. Griff’s thumb traced the outline of her lower lip. Holding her gaze, he lifted his finger and slowly licked it clean. If the humidity didn’t melt the crotch of her panties, Griff demonstrating his perfect oral skills sure as hell would.

“What do you think? A pinch more salt and pepper?”

She stared into Griff’s dark-as-sin pupils. Clearly he was waiting for her to answer, but damn if she could concentrate on anything beyond the flush of arousal making her dizzy with hunger. Only it wasn’t food she was lusting for at the moment. Knees wobbling, she clutched the counter. “W—what’s in that sauce?”

He was about to spring some hellaciously scary sexual request on her. If a midget and a monkey strolled in right now, she was so out of th—

“Looks like the party is revving into high gear.” ambled into the kitchen, his expression wicked and wolfish.

Her focus shifted between the two gorgeous specimens of male flesh on decadent display, and the puzzle pieces began locking together. Oh, sweet Jesus. Her heart frantically tap dancing, she snatched the embroidered dishtowel resting on the counter and blotted her perspiring forehead. Either the heat and the sauce were getting to her, or Griff and Logan. More than likely, all four.

She shot Griff an accusing glare. “Now I get it. You think the three of us having sex will fix everything, and I won’t have to worry about Nettie luring me to the dark side. Did it even occur to you to give me a say in this decision?”

Griff thunked the spoon on the stovetop before giving her his full attention. “Christ, do you honestly think you wouldn’t get a say? Damn it, you know I’d never force you into doing anything you don’t want.”

She plunked one hand on her hip and waved the other hand at the stockpot. “But you weren’t averse to a little cheating, courtesy of your pasta à la sex sauce.”

“I just wanted you to feel more comfortable. Relaxed.”

“Turned on,” she added, arching a brow.

A guilty flush spread from Griff’s jaw to his cheeks. Chuffing a laugh, joined them at the stove. “Catman had good intentions, sugar. The potion in the sauce is designed to loosen inhibitions and supersensitize erogenous zones you didn’t even know you had.” He flicked a glance in Griff’s direction. “Maybe you better give her a demonstration.”

She snorted. “Trust me, he already did.”

’s mouth curled in wicked devilment. “You only got a small taste of the potion’s capabilities. To truly appreciate its gift to the fullest, you need to ingest it in a more…intimate manner.” Before she knew what he was up to, unlaced the ties securing the sundress to her shoulders and pushed the bodice down, exposing her breasts. Gasping, she shot him a startled look. He awarded her a crooked smile. “Don’t worry, you’re gonna enjoy this.”

Something warm and sticky stroked her nipples. She jumped at the unexpected sensation, her gaze shooting to Griff’s sauce-coated fingers as they painted her areolas with the creamy substance. He lowered his head and followed the path of his fingers with his tongue, sparking a new conflagration of fire inside her. She shivered and Griff peered up at her, his eyes blazing. Curving an arm around her waist, he stood and claimed her mouth in a hot, devouring kiss. He tasted of Béchamel and exotic spice. Of magic and sex. She wrapped her fingers in his hair, tugging him closer, ravenous for more. Their tongues rasped in a mating dance and she wiggled against him, her nipples aching for the sumptuous devotion of Griff’s mouth.

’s knuckles skated the length of her spine. “Noticing the effects yet?” She mewled a response and he chuckled. “Excellent.” He worked the dress over her hips and the garment floated to her feet. His feather-light touch skimmed above the elastic of her bikini, teasing the dimples near her tailbone. She arched against ’s hand, her knees turning to jelly when he palmed her ass and gave it a good squeeze. He snuggled close behind her, so close she easily detected the hard ridge of his erection suggestively rubbing into her. “I’ve got something for ya, darlin’.”

Oh yeah. No mistaking that.

Griff’s mouth trailed to the crook of her neck, and something soft and silky caressed her cheek. She reached for the fabric, but swept it behind her head.

“Not yet. First I want something in return.”

She licked her lips, a hot liquid rush of excitement pulsing low in her belly. “What?”

“A taste.” ’s teeth scraped her earlobe, making her breath stutter. He moved lower and tongued the pulse point beneath her ear. “Same as you gave Catman.”

A whimper escaped her and tilted her head, his fingers tunneling in her hair as his lips glided along hers. Sucking her tongue into his mouth, he gave her a sneak peek at the devastation he could wreak on her body. If she let him. The question was, would she?

Posted by Jodi Redford at 6:09 PM No comments:

Email ThisBlogThis!Share to TwitterShare to FacebookShare to Pinterest
Labels: That Voodoo You Do excerpt

I just got the final approved cover for That Voodoo You Do and I love it sooooo much that I have to share it with the world! Okay, well...at least with you all. Lol. 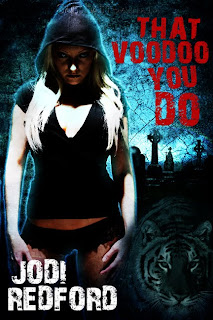 Email ThisBlogThis!Share to TwitterShare to FacebookShare to Pinterest
Labels: That Voodoo You Do cover
Newer Posts Older Posts Home
Subscribe to: Posts (Atom)