Today I'm thrilled and honored to be hosting the wonderfully talented Jessica Coulter Smith. And she has an exclusive excerpt for us to enjoy! 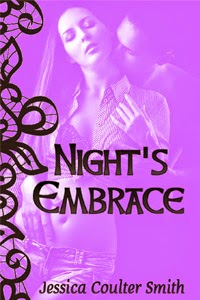 BLURB:
Annabel is ready to give herself to Poe, body and soul. But will he accept her offer?

Just as Annabel is ready to end her life, an amazing man comes to her in the dark of night. Her body responds to him and she finds that she wants him more than she’s ever wanted anyone. Allowing him to make love to her, she decides that she’ll do whatever he asks, as long as he’ll keep her with him -- even if he is a vampire.

EXCERPT:
With just one kiss, Poe had given me a gift. The gift of hope. I’d felt bleak and hopeless for so long that I’d forgotten what it felt like to want to live. But with one kiss, he’d given all that back to me, and more. As if he were a drug, I found that I wanted more. Kissing Poe was the equivalent of basking in the sunlight.
His hands cradled my face and he pulled back.  “How could someone so precious feel so sad?  How can you not know your worth?”
I wanted to speak, but found I had lost my voice.  Tears clogged my throat and burned my eyes.  A man who by definition specialized in death and destruction, a vampire, thought I was worth something.  A man who could kill me at any moment, yet instead had chosen to kiss me.  At that moment, I knew that I would do whatever he asked of me, and I would do it willingly, if only he would kiss me again.
“What do you want with me?” I asked softly. He was watching me intently, but I couldn’t tell what he was thinking or feeling. I wanted to pull him closer, to rest my head on his shoulder and have him tell me that everything would be all right. For once, I wanted someone to take care of me. I’d struggled for far too long on my own and I was tired, mentally, physically and emotionally tired. He was strong and I wanted to borrow some of that strength if even just for a moment or two.
He caressed my cheek and smiled sadly. “I want to take away your sorrow and give you light.  But how can a man who hasn’t seen the sun in over a hundred years give such a gift to anyone?”
“You could kiss me again.” I blushed as the words left me, the bold words having slipped from my mouth before I could stop them. I’d never felt so brazen in my life, but it felt good.
He pulled me closer and bent his head to mine.  He hesitated but a moment before claiming my lips with his own again.  When I felt his tongue stroke the seam of my mouth, asking for entry, I opened and let him in, giving as much as I took.
He tasted decadent, like chocolate and wine.  I opened my mouth wider under his assault, wanting to drown myself in him.  With his lips against mine, the darkness receded, letting the sunlight in for a moment.  I felt myself drowning in the onslaught of the intense emotions he evoked within me.
I stood and pressed against his body, quivering from head to toe.  Whether it was from the bitter cold or from desire, I couldn’t tell.  But I wanted him.  I knew it with every fiber of my being. Knew I wanted him on a level that terrified me; wanted him more than I had ever wanted anything in my life.
He broke the kiss and pressed my head to his chest.  Silence reined where a heartbeat should have been.  It was a little disconcerting, but I found I didn’t really care.  He made me feel things I had never felt in my entire life.  Whether or not he had a heartbeat was inconsequential.  The man who had the power to take life also had the power to give my life back to me, and that was far too intriguing to let a little thing like a heartbeat get in the way. If a kiss could make me feel so much, what would it feel like to make love to him?