Getting Kinky With Cowboys! 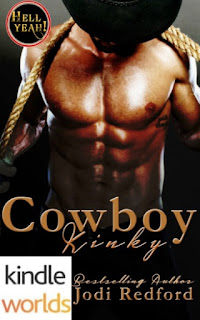 Several months ago I was invited by my good friend, Sable Hunter, to participate in the launch of her Hell Yeah! Kindle World.  Well, I'm thrilled beyond words that we are now live! Yeehaw! My contribution--Cowboy Kinky--is a crossover from my Kinky Chronicles universe. If you read K(ink)y Curves then you'll recognize the hero and heroine. ;) I'll share an except in a bit, but also make sure to check out all of the other awesome Hell Yeah! KW stories by visiting the handy-dandy links below. 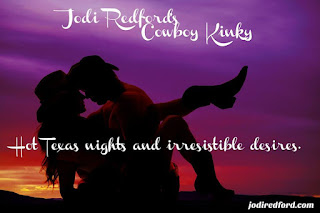 Ford Beckett—former adult film star and leading man in Kaitlin Cross’s kinky fantasies. There’s only one problem: he’s her boss. As his PA, she puts in plenty of overtime just keeping him out of the doghouse with the numerous ladies warming his sheets. Her biggest fantasy involves clubbing him with a blunt object. But lately he’s been getting under her skin and pushing the boundaries of their relationship. The scary part? She’s beginning to enjoy it. What she desperately needs is some breathing room between herself and temptation. A friend’s wedding provides the perfect excuse to get the heck out of Dodge. Except for one tiny hiccup… Ford is the best man.

Two decades ago, Ford left Texas with no plans of returning, but friendship and loyalty have called him home. He won’t turn his back on those who’ve stood by his side, even though there are plenty who’d prefer his boots never stepped on Texas soil again—including his family. Then there’s his biggest problem of all. Kait. Giving in to the blazing chemistry between them? A disaster waiting to happen, but avoiding calamities isn’t exactly his strong suit. That’s why he’s always relied on Kait to put out the fires in his love life. Seeing how she’s the one making him sweat? Yeah, consider him screwed.

Hot Texas nights and irresistible desires. Two stubborn hearts don’t stand a chance of avoiding the flames. The only question is will they survive the afterburn?


There are some things guaranteed to stay imprinted on a woman’s brain for the rest of her life.

First glimpse of her boss’s naked ass? Quadruple check, and Lord have mercy.

Hypnotized by the spectacle taking place right before her eyes, Kaitlin Cross white-knuckled the kitchen counter and swallowed hard. On the other side of the window, Ford Beckett—the number one source of her daily frustration and desire to drink—stretched his arms over his head and twisted his broad shoulders a smidge to the right, his rock hard glutes and sleek back muscles flexing. He repeated the motion, this time to the left.

So help her God, if he bent to touch his toes she’d be done for. Dead on arrival. Shock paddles wouldn’t revive her.

Every inch of him was absolute Grade A bronzed perfection. Not a single tan line anywhere. Despite that mouthwatering fact, in the nearly five years she’d been working as his PA she’d never once seen him sunbathe in the nude. Until today.

She should look away. For her sake, not Ford’s. The shameless devil wouldn’t give a flying squirrel’s butt about her ogling his ass. He’d shown off a hell of a lot more than his firm tush in the dozens of XXX-rated films he’d starred in before moving out of the spotlight and starting his own production company. Knowing him, he’d probably turn around and flash the whole monty if he suspected she was peeping on him. Thank God he didn’t—

Cursing under her breath as he pivoted, she quickly sidled toward the cupboards. Close call. A loud splash a few seconds later announced his dive into the pool. Deciding to risk it, she peeked toward the window just as he surfaced. He slicked back his glossy sable hair and glanced toward the house. Even from this distance she could make out the wicked sparkle in his eyes and the wolfish hint of his teeth.

Sonofabitch. He’d set her up with this peep show. She’d bet her entire month’s salary on it. This little stunt went right in line with the numerous ways he’d been messing with her lately. For the last month and a half he’d jumped on every conceivable opportunity to tease and torment her. It’d all started that damn day she’d lost her cool and pushed him into the pool. Instead of accepting her threat that she was finally quitting for good, he’d hauled her into the pool with him. Then, in his eternal quest to ruffle her feathers and throw her off balance, the goddamn maniac kissed her.

Worst of all? She couldn’t stop thinking about the hot pressure of his lips against hers. Jeez Louise, it hadn’t even been that great of a kiss. Barely lasted a second. But that solitary second tipped her world off kilter. Although he hadn’t tried to kiss her since, every once in a while she’d catch him looking at her a certain way. Like he was not only considering it, but planned to thoroughly annihilate her equilibrium in the process.

God save her if that happened.

She wanted to believe she could hold her shit together and resist him. She was not a weak woman, for crying out loud. But Ford Beckett was no mere mortal. The man could charm the panties off of a nun. She’d heard plenty of tales about his legendary status between the sheets. Or in his case, pretty much every venue known to mankind and accessible to a film crew. Despite her overwhelming curiosity, she deliberately refrained from watching any of his old movies—for the sake of her sanity and so she’d be able to look him in the eye every day at work. There were some things she was better off not seeing. His O face during one of his countless money shots topped high on the list. Still, it hadn’t kept certain jackwagon colleagues from sharing tidbits with her. Like apparently Ford was quite the multitasker. Not only could he please two women at once, he could do it while riding a horse. How the ever living hell was that remotely possible? Did three people even fit on a horse? Was there a midget involved? And goddamn it, no, she refused to find out.

Narrowing her eyes, she watched him swim toward the opposite end of the pool, the crystal blue water rippling in his wake.

He was up to something. And she didn’t trust him for one hot second. She grabbed her coffee mug from its perch beneath the Keurig’s dispenser and stalked in the direction of his home office. Though truthfully, she tended to think of it more as their office. She spent more time in it than he did. When you got right down to it, she spent more time in it than she did her own condo. Maybe she should move in and be done with it. But then she’d have to deal with Ford 24/7. She barely resisted the urge to strangle him as it was. For sure she’d be in some major trouble if she lived in the same house with him. Not to mention she’d have no reprieve from the pesky, inappropriate fantasies he stirred in her. The ones that didn’t involve potential murder charges being brought against her. She could handle those other kind. It was the ones that left her aroused and in need of a serious session with her vibrator that proved hazardous to her wellbeing.

Bad enough having sinful thoughts about her boss. The fact that her boss was Ford—a man who had longer relationships with the ham sandwich he had for lunch that any woman he slept with? Yeah, she should have her head examined.

Or better yet, find a guy to end her seven-month dry spell. That had to be her problem. Since breaking up with Russ, she’d put entirely no effort into dating. Partly that was due to the crazy production schedule with Ford’s newest project. The spicy, adults-only show was doing better than any of them predicted, earning the coveted title of most-watched late night series on the air for their network—something they were all ecstatic about. But the show’s success also came with the price of none of them having a life for the last few months.

Now that they were on their mid-season hiatus? She was getting laid. Plain and simple. And taking a damn vacation. Hell, she’d get laid on vacation. No strings attached. No awkward morning after. No having to see the guy again. Freakin’ perfect. Best part of all? A whole week of not being subjected to Ford’s ass—naked or otherwise—tempting her with impure thoughts.

Pumping her fist, she walked into their office...and stalled short when she spotted his camo PJ bottoms draped across her seat. Approaching the garment with all the caution she would a crouched lion, she inched forward and pinched the dangled leg between her fingertips. Oh Lord. The flannel was still warm from his body. And she didn’t have to press the fabric to her nose to get a good whiff of the woodsy body wash that constantly killed her concentration whenever he insisted on crowding into her personal space. Which was pretty much every other second. It was impossible to focus when his bigger-than-life presence invaded her senses. To add fuel to the fire, she always dredged up the craziest scenarios in those situations. Especially when they were in the office together.

The fantasy her twisted subconscious loved to latch onto? Ford spanking her. If he tried such a thing in real life she’d go ballistic on his ass. Seriously, the only way they’d recognize him afterward would be through his dental records. But for some reason her mind insisted on going there. She could see it too clearly.

He’d do something to piss her off—because hello, that was damn well guaranteed—and she’d rip into him. Instead of cocking that infuriating grin of his that always made her teeth grind, he’d plunk down in his chair calm as can be and tug her across his lap. Before she could cuss him out properly, his palm would land on her butt with enough sting to earn her gasp. She’d squirm to avoid the paddling, but the movement only made things worse by rubbing her crotch against his thigh. Within seconds, her clit would be at attention, tingling and greedy for more intense friction. Desperate to ignore the traitorous demands of her body, she’d bite her lip, killing her whimpers before they ratted her out. Little good it did. Somehow Ford knew precisely how her body betrayed her, and being the devil he was, he intended to take advantage of it.

Without saying a word, he’d yank up her skirt and massage her reddened buttcheek through the lace of her panties before sliding his hand inside. His touch on her bare skin? Indescribably sinful and forbidden. She shouldn’t, but she wanted more than the lazy glide of his fingertips across her rear-end. She craved a bolder caress, down where she ached for it most. As if he’d read her mind, he’d trail his hand lower, tracing the crack of her ass, and then gliding his fingers along her pussy. By that time she’d be embarrassingly drenched, and the bastard would let her know it in no uncertain terms, swirling through her wetness so that the air would be thick with the incriminating slick sounds of her arousal. All the while he played with her, the hard bulge poking into her belly taunted her, promising even more exquisite pleasures to come. All she had to do was reach down and—

“Damn, darlin’. Next time wait ‘til I’m in my flannels before you start fondlin’ them.”